By Cindy Tran and Belinda Cleary For Daily Mail Australia 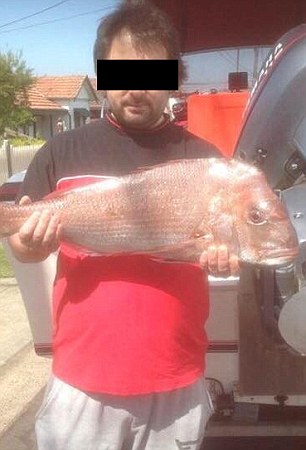 The wife of a French tourist who was stabbed to death in the outback had tried to fight off the alleged attacker by bashing him with a picnic table.

The 30-year-old Frenchwoman watched helplessly as her 33-year-old husband was killed after he was brutally stabbed in the neck in the Northern Territory on Wednesday.

Melbourne man Pande Veleski has been placed under police guard in hospital after he was arrested on Thursday over the alleged stabbing murder of the Frenchman.

The French couple had stopped at a Connor Well truck stop, about 100km north of Alice Springs, when Veleski allegedly pulled up behind the pair.

They ‘exchanged pleasantries’ with the man who then allegedly stabbed the backpacker in the neck in front of his wife, The Australian reported.

The victim’s wife tried to save her husband from the suspect by hitting him over the head with the picnic table before he escaped in a Hyundai i30 following an unprovoked attack, NT News reported.

The Victorian father-of-one – who has a history of mental illness – fled into bushland on foot overnight after police located his vehicle – but he was arrested naked, 60km from Ti Tree – where British backpacker Peter Falconio was last seen alive.

Scroll down for video 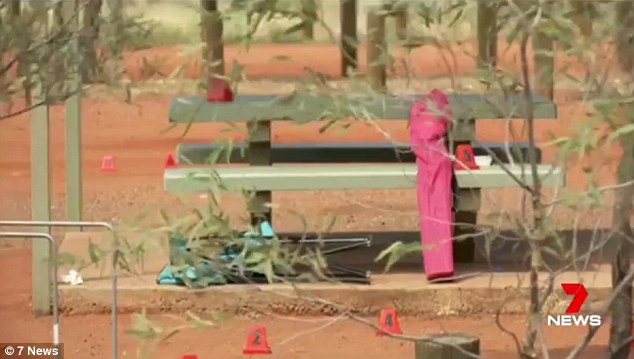 The tourist and his 30-year-old wife had stopped at Connors Well, about 100km north of Alice Springs, when Veleski allegedly pulled up behind the couple 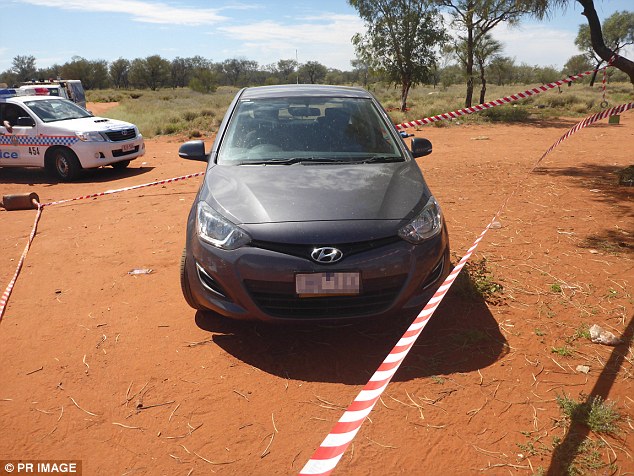 The getaway car: The attacker fled the scene in a silver Hyundai hatchback (pictured) with a Victoria-registered numberplate after he allegedly stabbed the French tourist on Wednesday 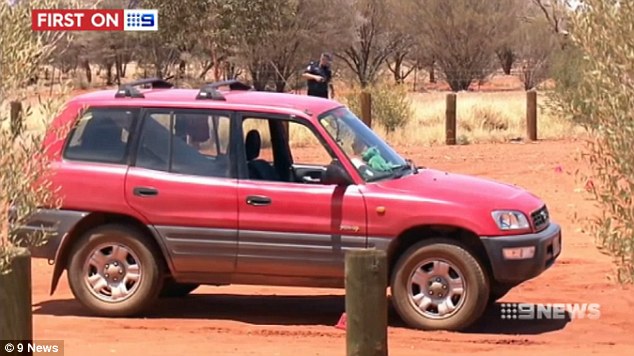 Mr Veleski spent the night in hospital seeking a psychiatric assessment as he is being questioned by police over the murder. He is yet to be charged.

And if his social media account is anything to go by, his Facebook paints a picture of a keen fisherman who breeds pigeons.

He seems to have a love for animals, with pets ranging from a dog to a sulphur-crested cockatoo named Mahamed.

Mr Veleski lives with his parents in Melbourne – and he is the father of a young girl but they don’t have much of a relationship, 9 News reported.

On Friday, his brother Tony Veleski revealed the family did not know he had left the state because they thought he had travelled to the family’s holiday house in Dromana, on Victoria’s Mornington Peninsula.

‘He came and got my keys. He was supposed to be in Dromana,’ Tony told Fairfax Media, adding that his brother had been treated for a mental health condition.

‘We were meant to go there today [Friday] to see him, to spend time with him, me and my son.

‘We’re really sorry for the French tourist, and we’re sorry for my brother as well.’

Mr Veleski’s sister-in-law Mary Veleski, Tony’s wife, told NT News the family were aware he was ‘unwell’ but they ‘never knew it was to this point’. 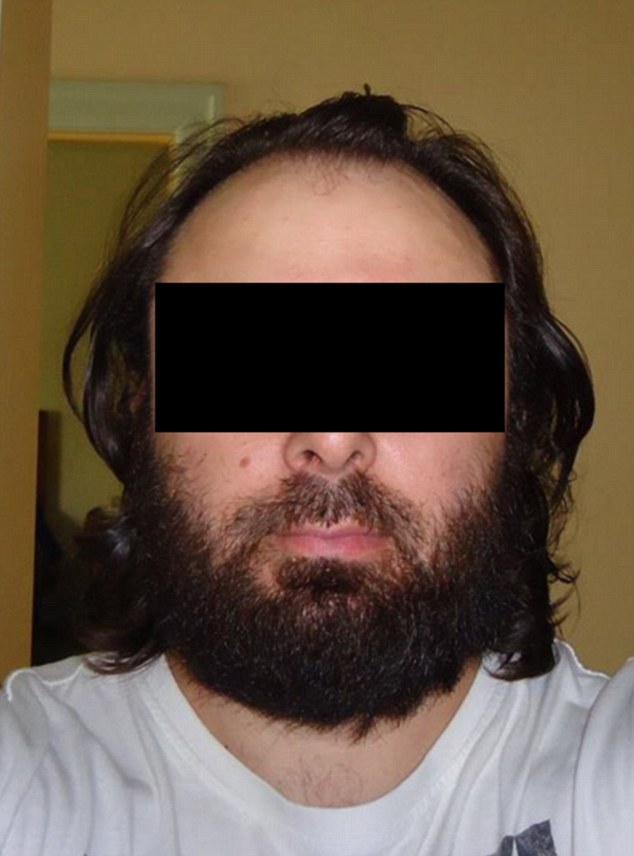 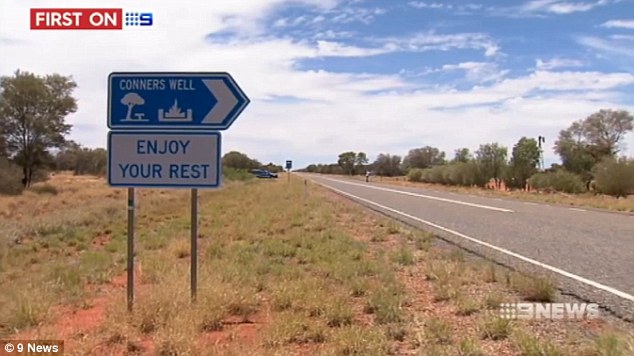 The tourist and his wife had stopped at Connors Well, about 100km north of Alice Springs 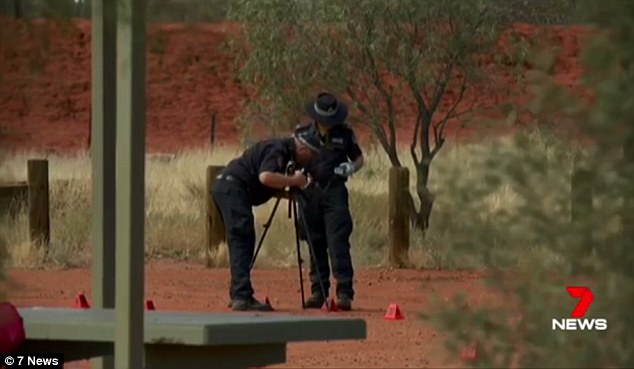 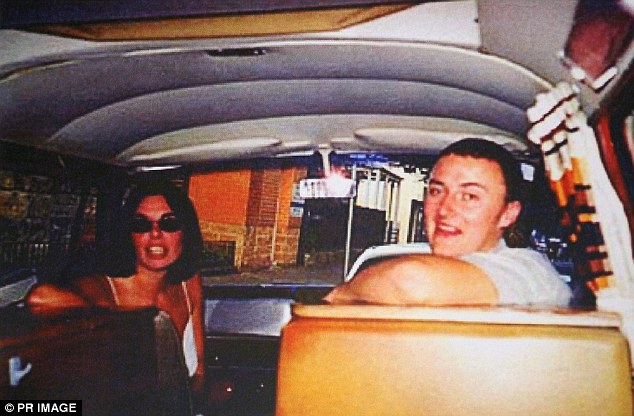 It comes as emerging details of the shocking murder in Australia’s red centre have an eerie resemblance to that of Mr Falconio 15 years ago.

The alleged attacker was found the following morning in the same area where the British backpacker Peter Falconio was last seen alive – 100kms from where he allegedly attacked the Frenchman.

The Frenchman died after he was allegedly stabbed in the throat in what police are calling an ‘unprovoked attack’ – the alleged attacker fled in a grey Hyundai i30 – he is expected to be charged on Friday.

Falconio – who was murdered by Bradley John Murdoch 15 years ago was also travelling with his partner through the red centre when he was attacked.

The British man, then 28, and his girlfriend Joanne Lees were directed to pull over on the night of July 14, 2001.